Atsunta Pass, eastern Caucasus. Getting into that region isn’t exactly the easiest thing in the world. Journey from Georgian capital, T’bilisi,  to Kvemo Alvani takes about half a day on a bus and when you arrive there it’s already too late to go into the mountains. Next day, first thing in the morning, you have to show up at the main crossroads in Kvemo. There are many jeep drivers willing to take you 70km up to Omalo, but you have to bargain with them for a good price. We were waiting if somebody shows up willing to share a jeep with us, but after two hours nobody came. I guess by that time the drivers figured out that the two of us are not gonna pay for four seats in a car and one local arranged for us to go with two other guys which were taking supplies up the road. We settled at half the usual fare and had to cope with watermelons rolling in the back of the jeep. And what a jeep it was. 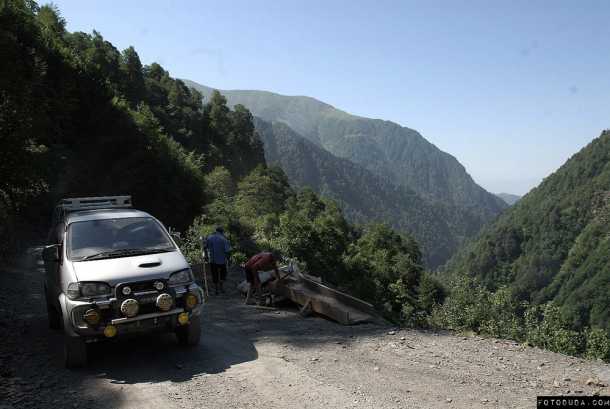 Never seen such a car. It was some Mitsubishi off road van kinda thing, guessing by the right hand drive imported from Japan. Seven seats, switchable two- or four-wheel-drive, four-wheel-steering, two gearboxes, a shiftless one and a low range one, all kinds of locking differentials, air con and attitude indicator to top that. You might think that they would take special care of this space car in such remote and poor country. So did I. Right until we stopped in the next village where we parked healthordisease.com at somebody’s back yard and they started to put fuel in using non the less but a bucket and a funnel. You might also think that when you’re driving in the mountains for a living, where the roads go as high as three thousand meters, with one or two hundred meter drops, and see things like the one below, you ought to take your driving seriously. So did I.

Right until after an hour into the ride when we stopped for a break and the drivers shared a beer with us. I didn’t feel so well that morning, but I figured, if I don’t drink that lager, the driver will gladly do it for me. After another two hours we stopped again, but my car sickness got so bad by that time that I let them drink all the vodka themselves. It was a good home distilled ‘chacha’, made from grapes, no less than sixty percent strong. They think it’s alright as long as they have a saint Christopher’s picture and a little cross hanging from the rear view mirror. When it’s god’s will whether you’re gonna have an accident or not, you might as well enjoy yourself and be drunk all the time. Perfect logic. Religious people scare me. 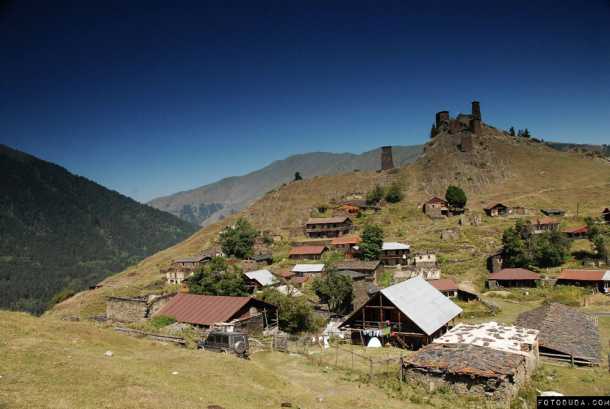 With all gods’ and goddess’ wills combined, we made it to Omalo. They punished me for my arrogance though. My car sickness developed into a high fever and exhaustion, I was done for the day. It can’t be that I’m such a sissy, it must have been them, I could hear them laughing at me. At the time we didn’t know there was another way to get there, to try your luck and hitch hike on a back of a Kamaz six-wheel-drive lorry. Maybe next time.

You can find more pictures from my 2010 Georgia trip here.